Around 1960/1962 issued solid-state stereo amplifier for USA markets made in Japan for LRE Lafayette. 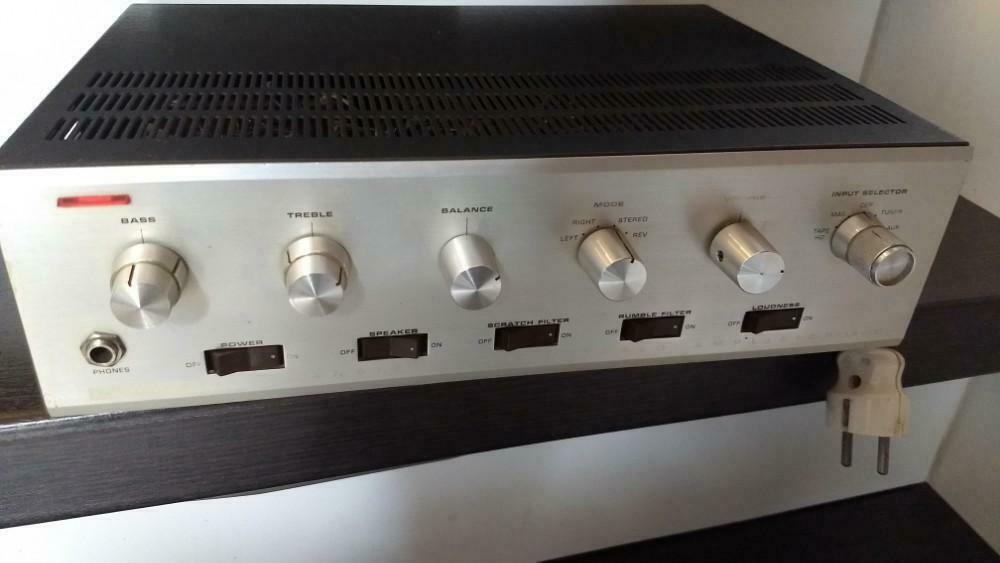 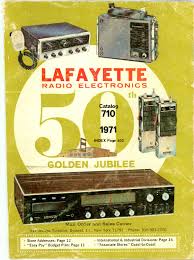 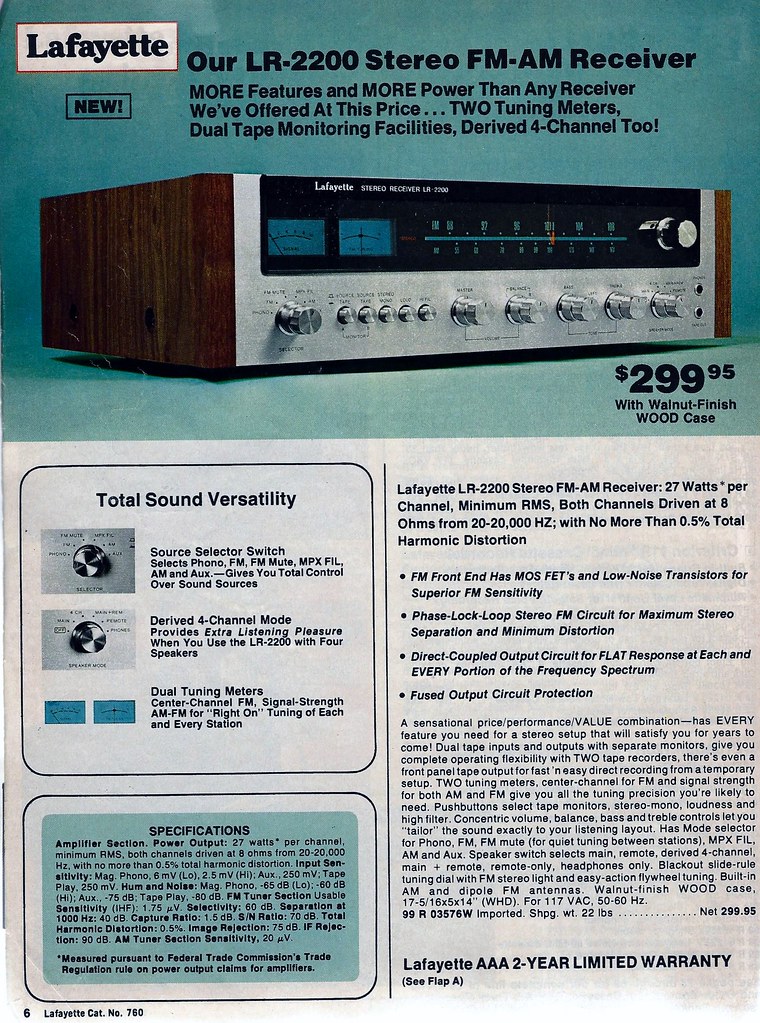 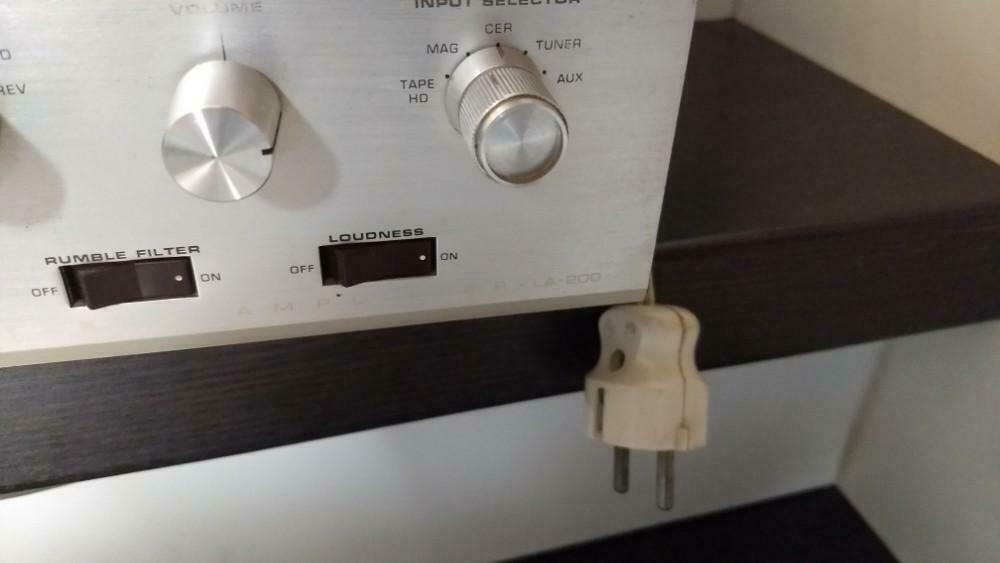 This amplifier comes with cinch input sockets.
Light and compact footprint amp.
Metal case.
Well build and good parts used.
This amp employs all germanium transistors.
The pcb's of the amp are sitting vertically in the amp.
Protection circuit for power amp section. 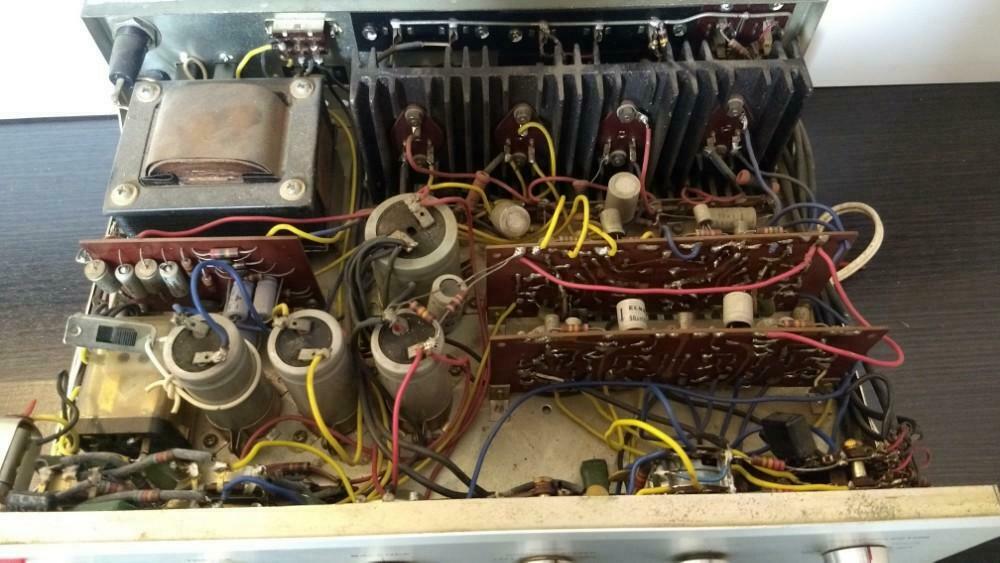 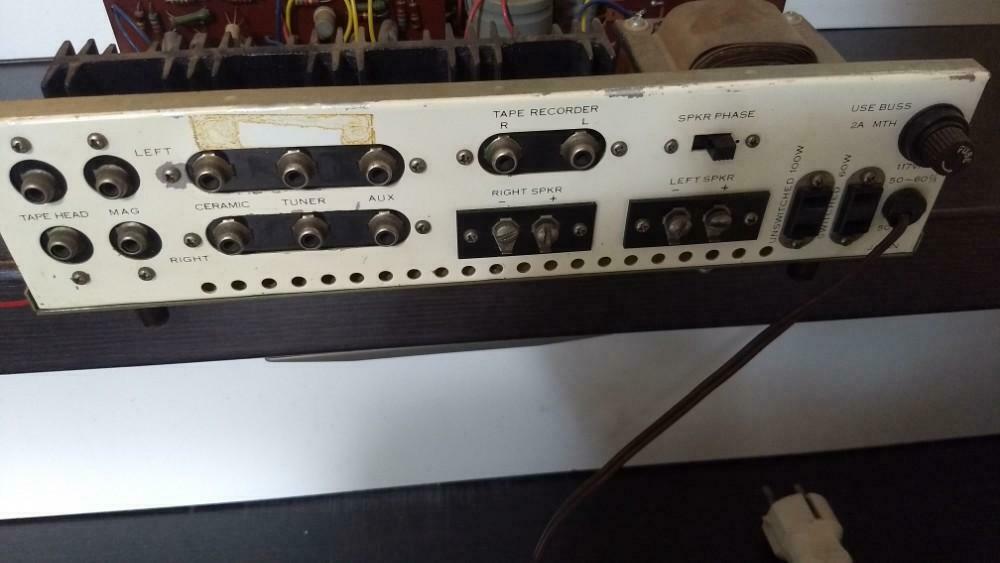 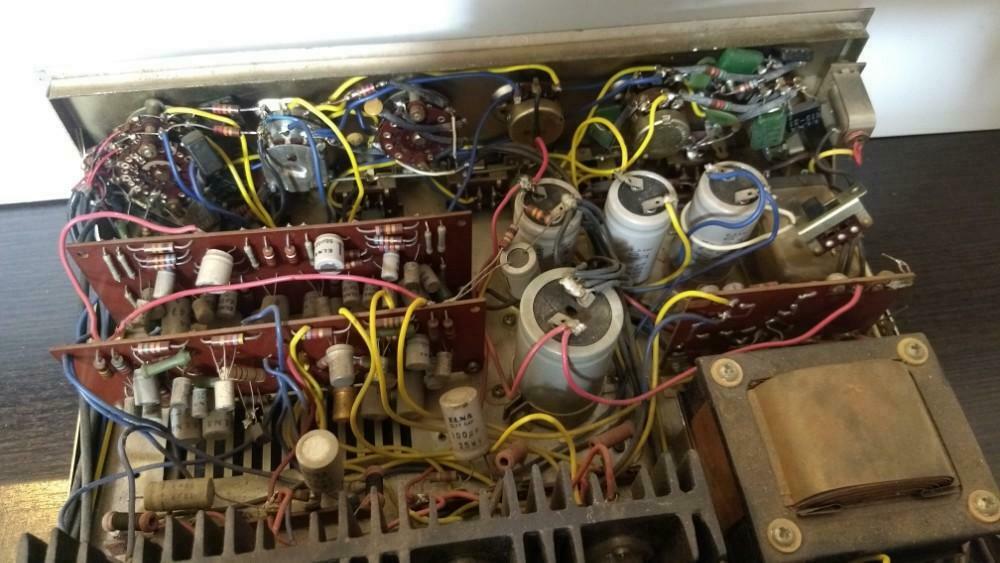 Pcb's from back view unrestored, here you see how unprofessional the initial repair was done: ^
like a silicon transistor soldered to the leads of the old broken Germanium NPN driver transistor,
this silicon transistor blew instantly when the amp was switched on.

Power rail main Voltage is -40 Volt asymetric, the power transformer has both 117V and 230V~ connections:
consequently due to the detrimental power change to 230V in Europe the voltage of the power rail is ok on 230V setting.
Power supply + is connected to ground.
OTL and DTL class B push-pull power amp section.
Early direct DC coupled power amp section with early Germanium driver transistors: Toshiba 2SB200 and 2SD100,
pre-driver: 2SB56. Complementary driver stage, semi-complementary power stage. The pre-amp is AC coupled.
All Toshiba & Matsusita germanium transistors inside.
This amplifier has a "power transistor protection" circuit on the power-rail pcb. 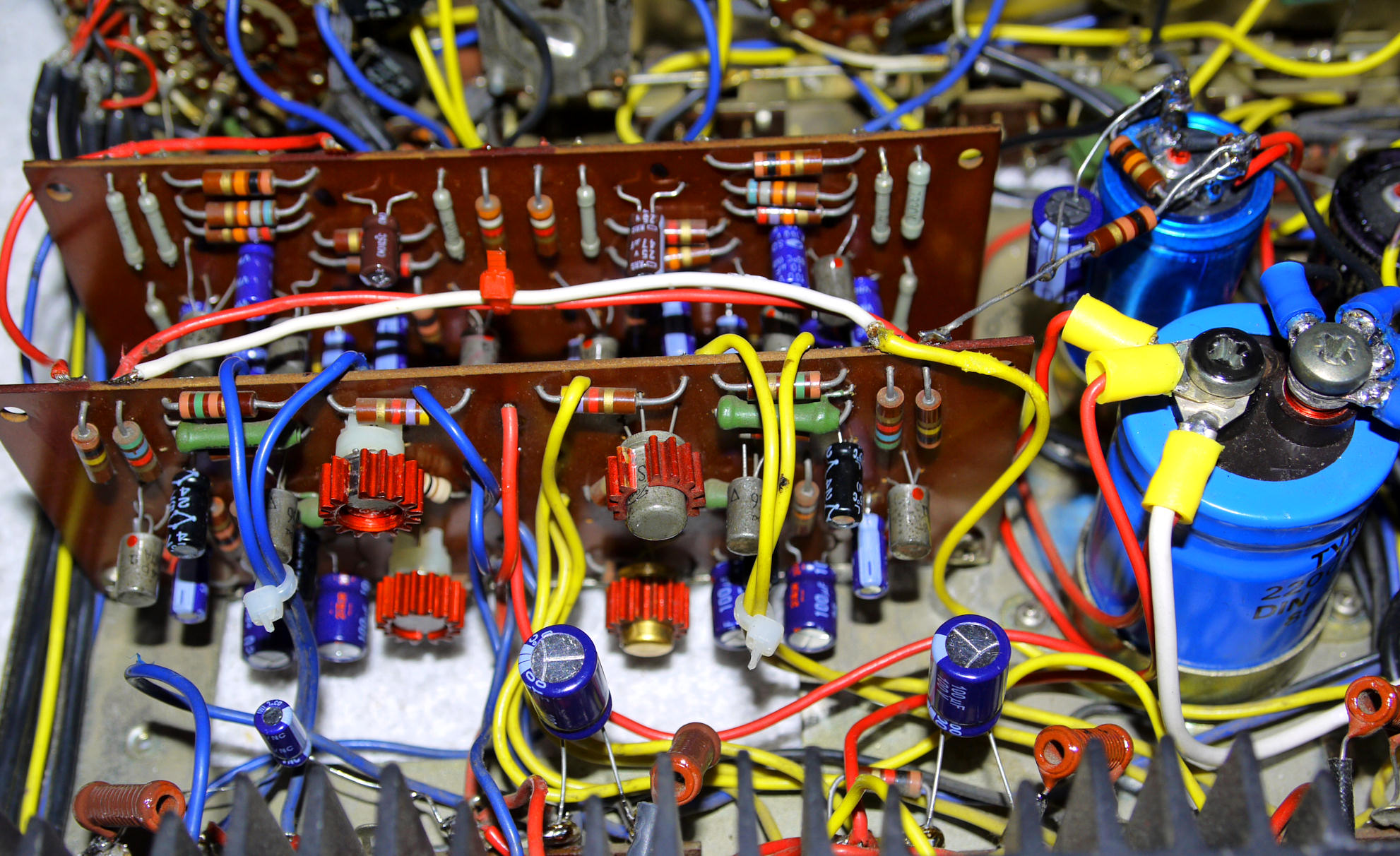 The 230V mains connection was completely messed up, new wiring was needed.
The power rail capacitors were leaking, cracked & broken and had to be replaced.
I replaced some diodes, capacitors and resistors in the power supply and power rail:
Sprague PS main cap, Philips PS secondary cap, Elna Gold Audio caps for the PA output stages.
Also I exchanged the speaker output screws for sockets as they were of bad quality.

All Matsusita pre-amp transistors did not meet the specs anymore and had to be replaced,
one of the input transistor 2SB346 of the R-channel power-amp section, had a ß of 1,
and was intermittent and did not amplify anymore, but attenuated the input signal, initially the ß should be 95.
The first input transistors 2SB348, you may use AC126 (Philips, Norelco, Valvo) as replacement, this is a LN version of the AC125.

I ommitted the mains switch 117 - 230 V as in Europe this switch will never be used.
Also the speaker-polarity switch as it is not of any use today.
I left both switches in the amp.

The "power transistor protection" circuit works great, it stops the power amps from amplification of the signal actively,
when the amp is over its power capabilities. If it protects the power transistors? probably, but not in all situations obviously,
as there are many causes that can destroy the amps final transistors, overdriving the amp is only one. 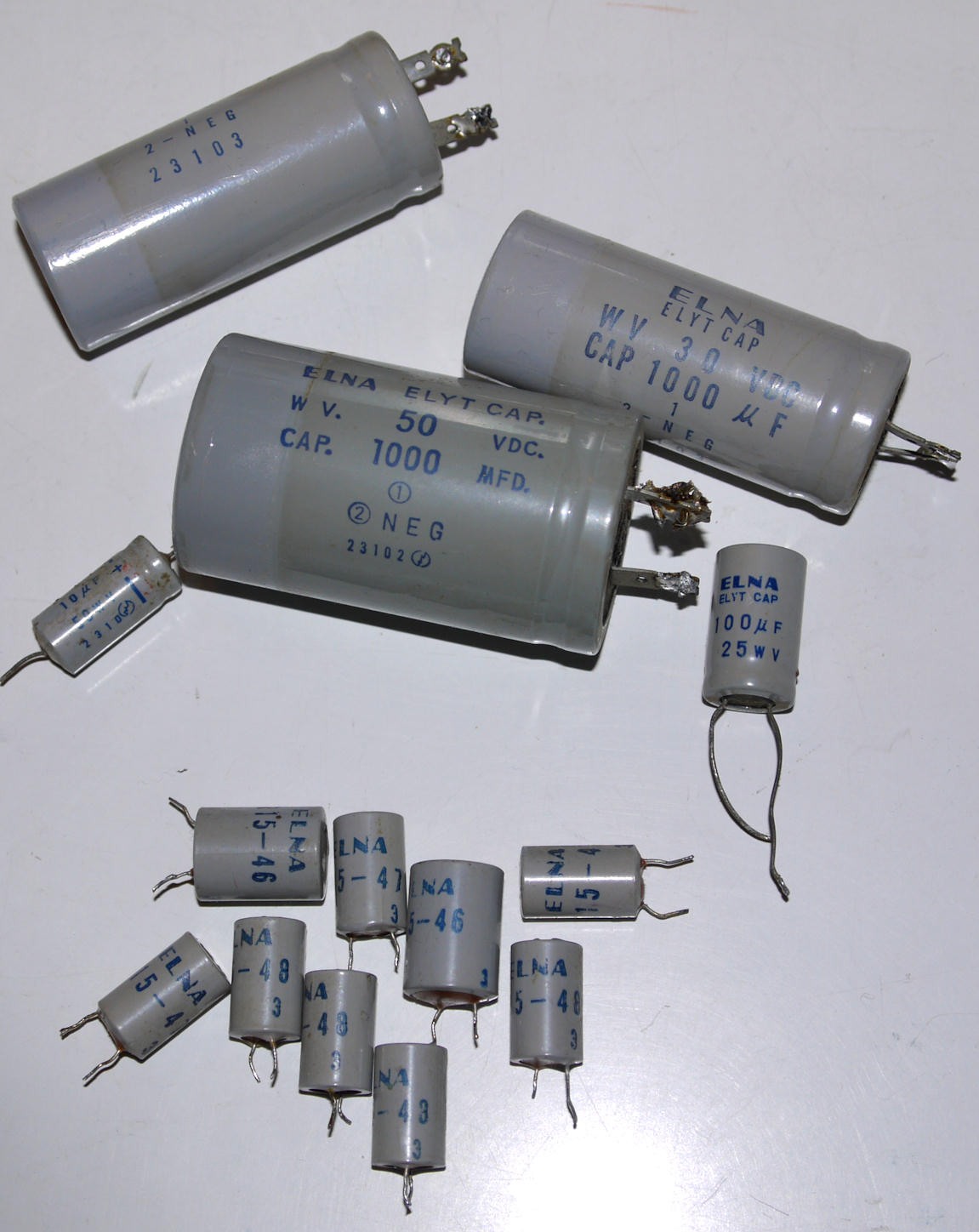 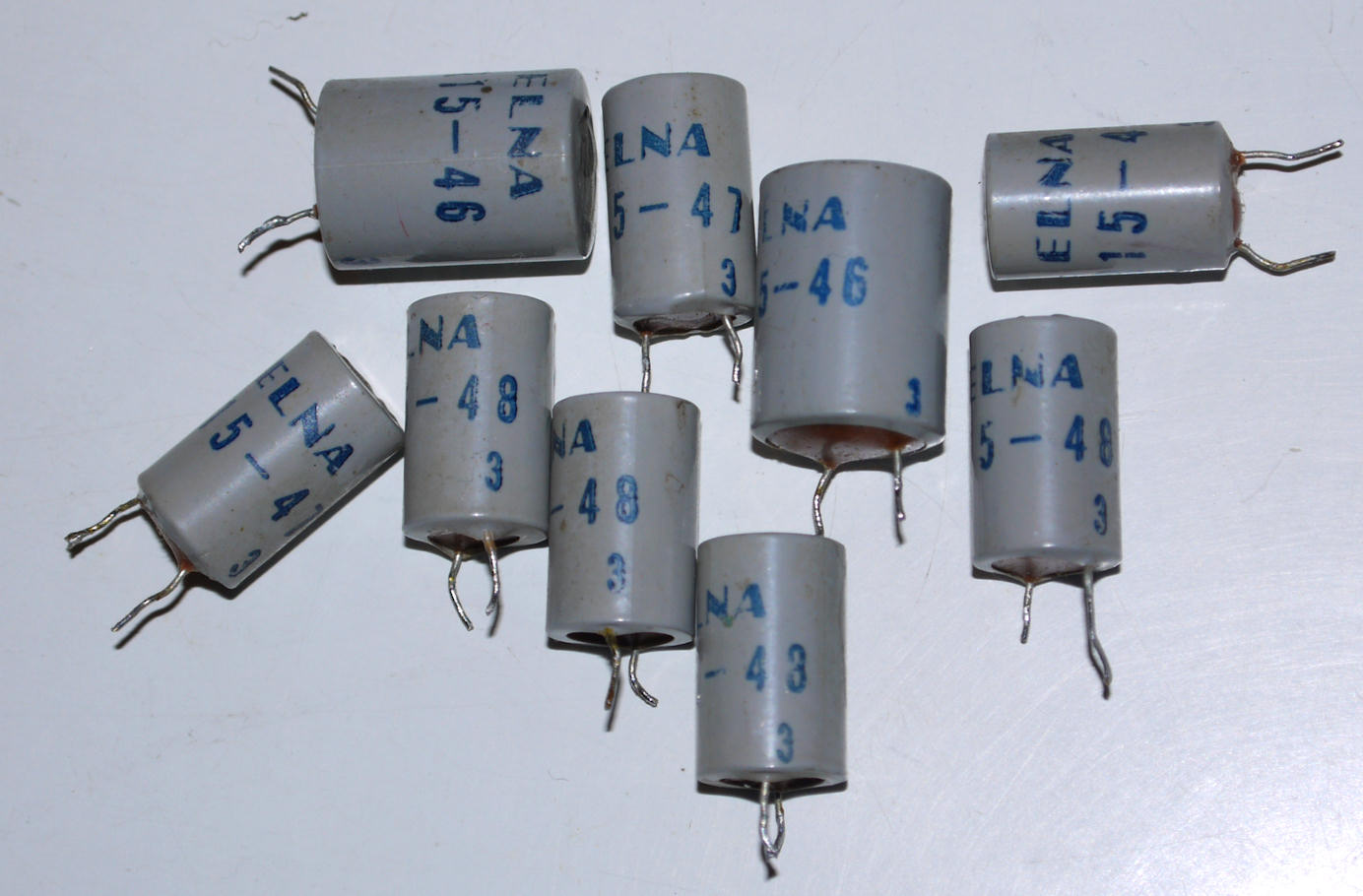 ^ These show like electrolytic capacitors, but they are not: High integration did not start in the 1980's: it started already in the 1960's.
These rare "look alikes" * are transistor-emitter integrated devices, yes really they are:
consisting out of a resistor and a capacitor, complete with clue-less print on the can,
no indication on the schematic diagram what 15-48 may mean and what the lead indication 1 & 3 means,
luckely on the schematic diagram Lafayette issued, the consisting parts are indicated and not the devices themselves.
So the repair was easy to do adding a resistor on the copper side of the pcb's at every emitter-device's place, as you can see on the photo.

* These parts were quite commonly used in the 1960's electronic world.
These particular were made by Elna, but there were also other manuafacturers like Sanyo, Sanken, Nikko etc.
Elna stopped quite early with production of this kind of electronic parts,
since the company recognized that the incorporated electrolytic caps deteriorated quite fast.
Other companies like Sanyo kept on improving this kind of products and later came with ie. the famous STK-module series. 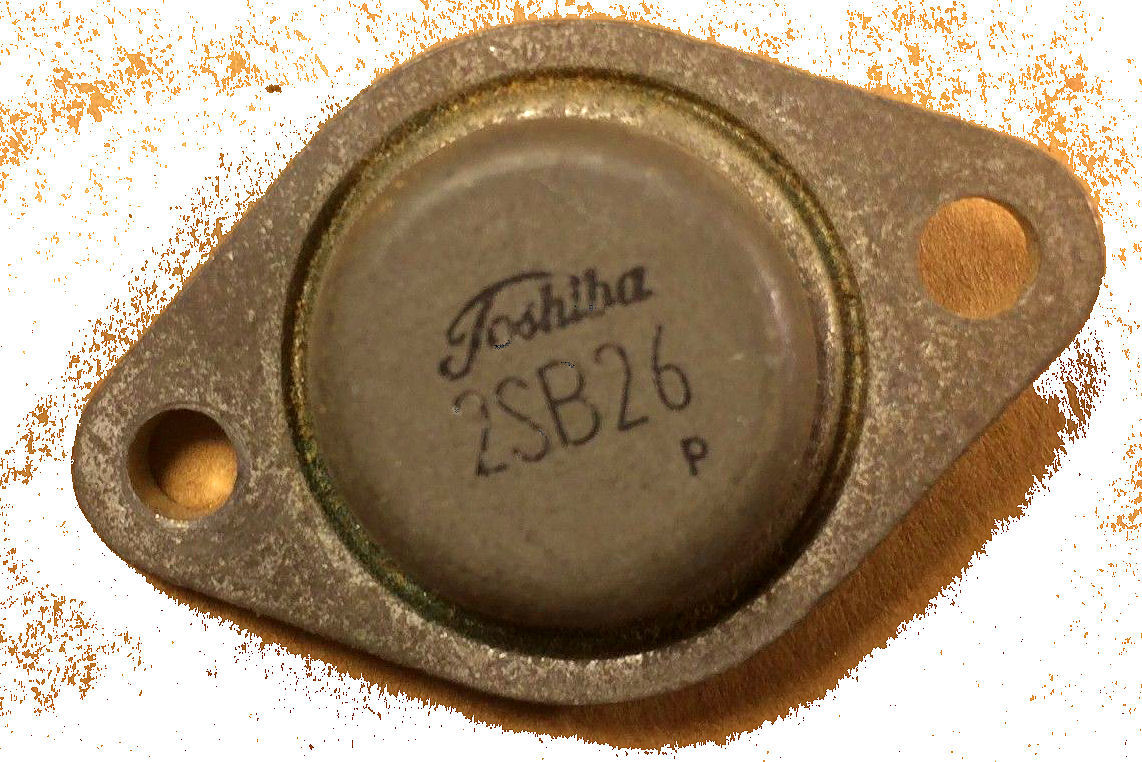 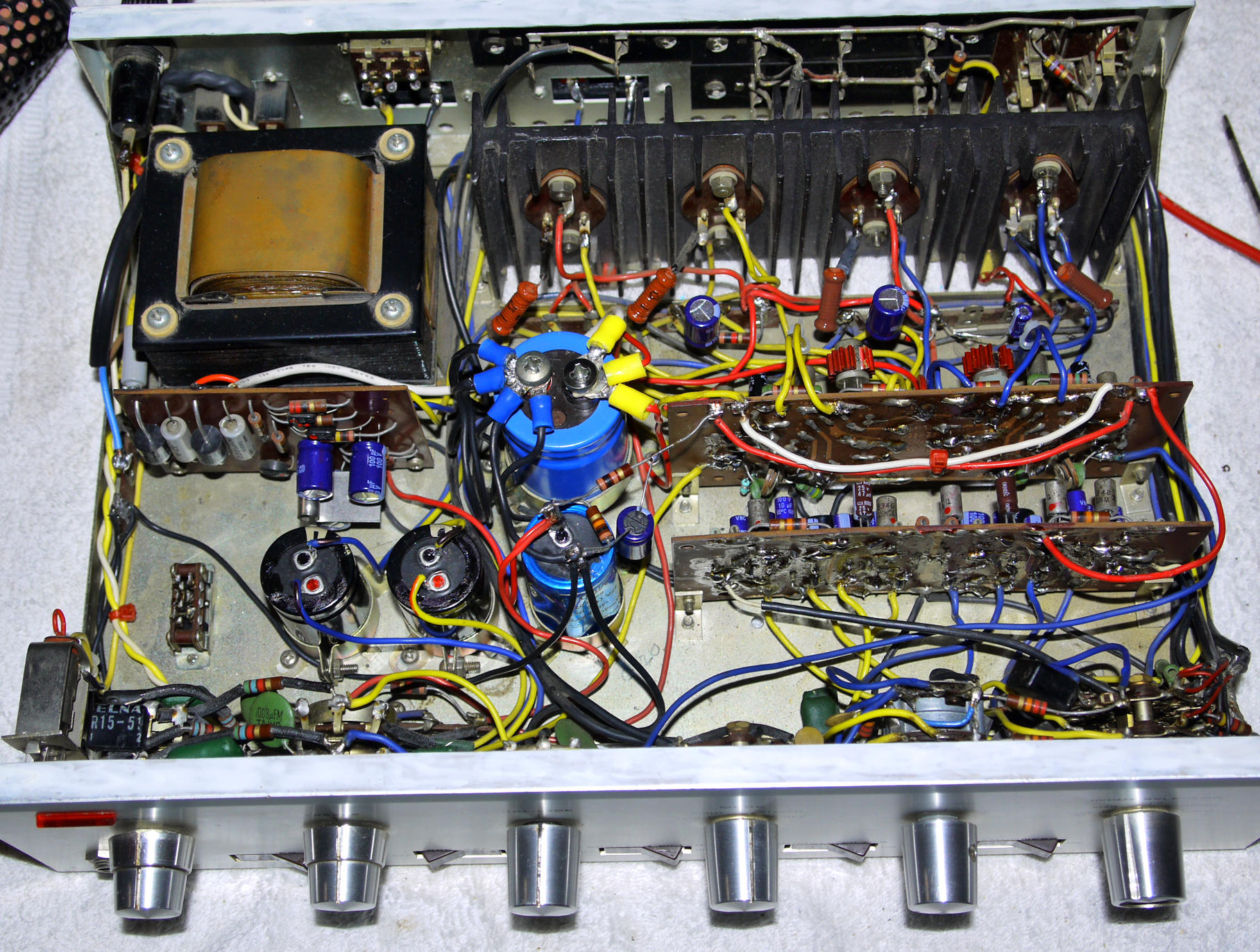 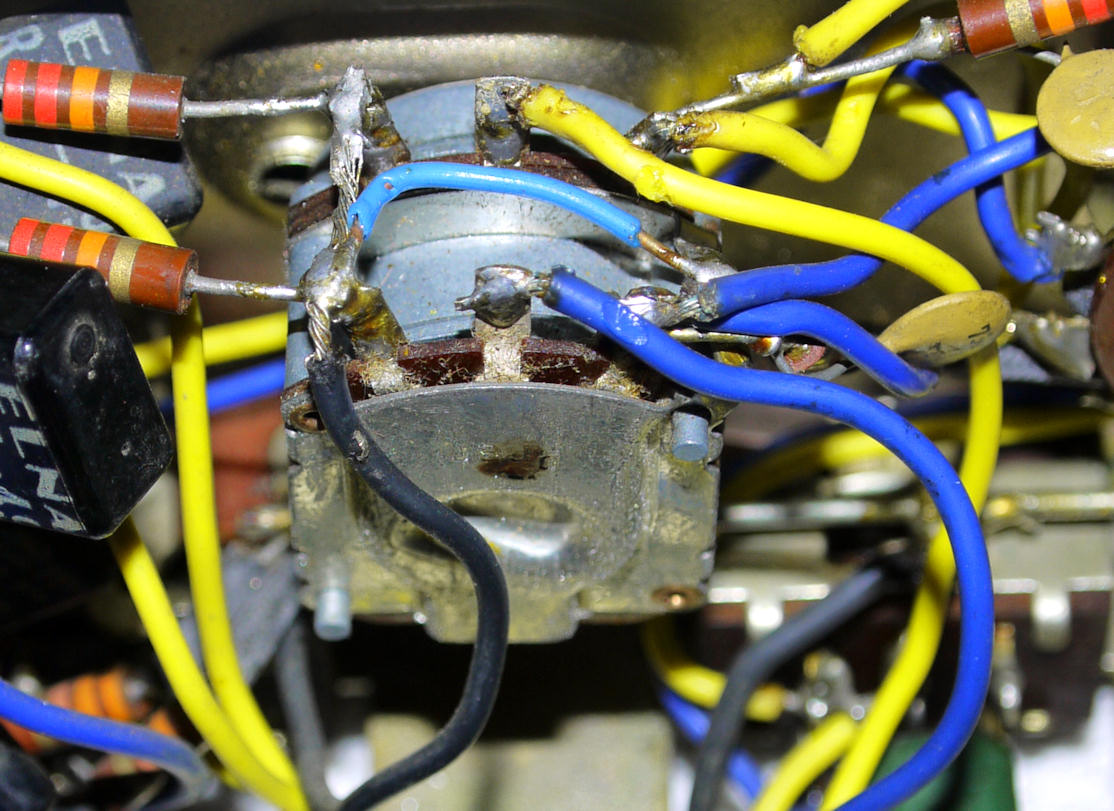 The volume-pot had been exchanged at an earlier repair: a unprofessional service attempt,
the pot they used is of German make (Preh) and not fit to be used in this amp: the Loudness-switch was disconnected during this repair.
This pot lacks the 4th connection for the Loudness connection. Also the soldering attempt is a failure.
I exchanged the wrong pot for a Japan make pot with the 4th Loudness connection on it,
and making the Loudness-switch functional again by adding wiring and the disappeared 2x 1000 pF caps, as seen on the photo's below. 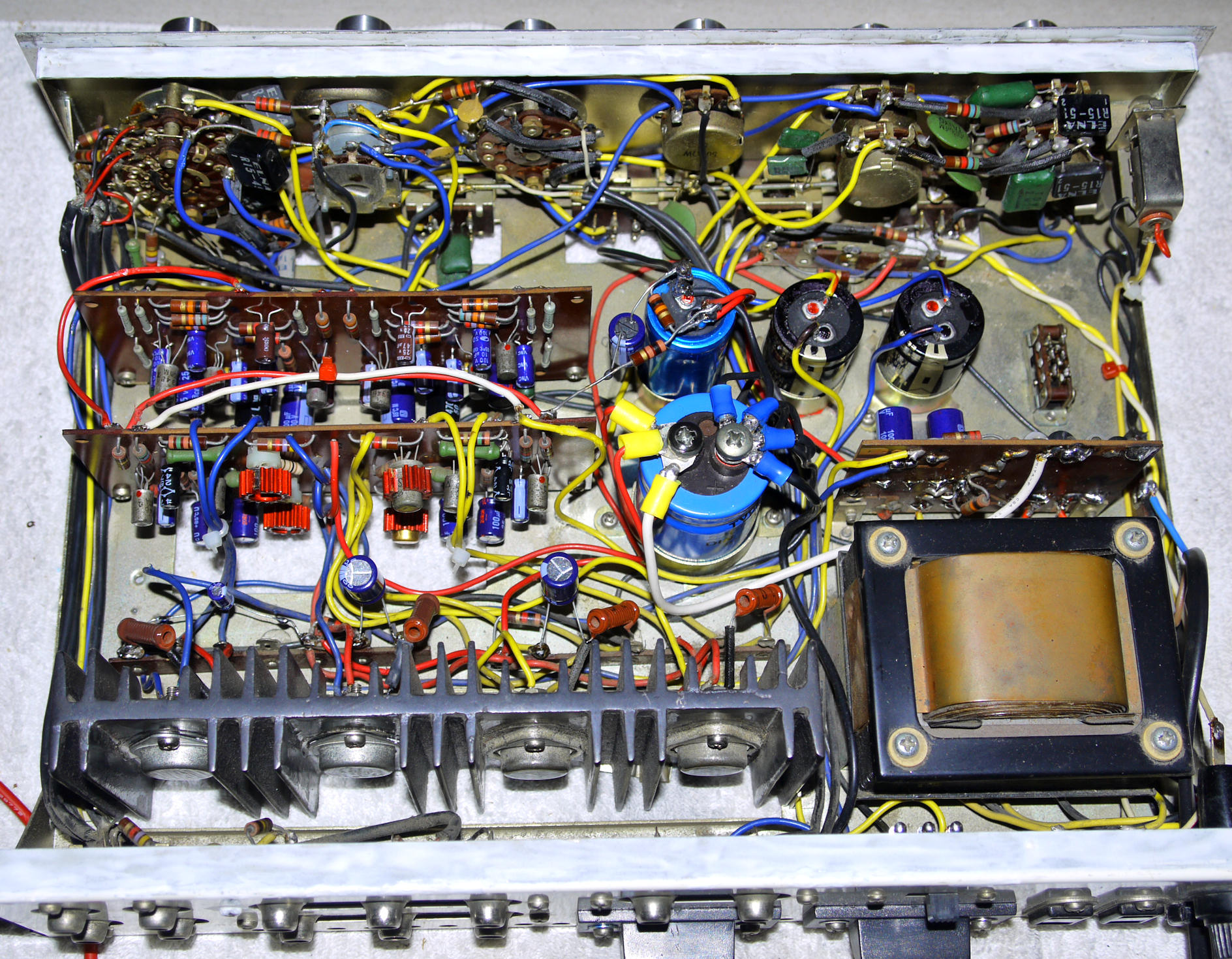 Restore almost complete inside amp, exchange of pot is now one of the last things to do ^ 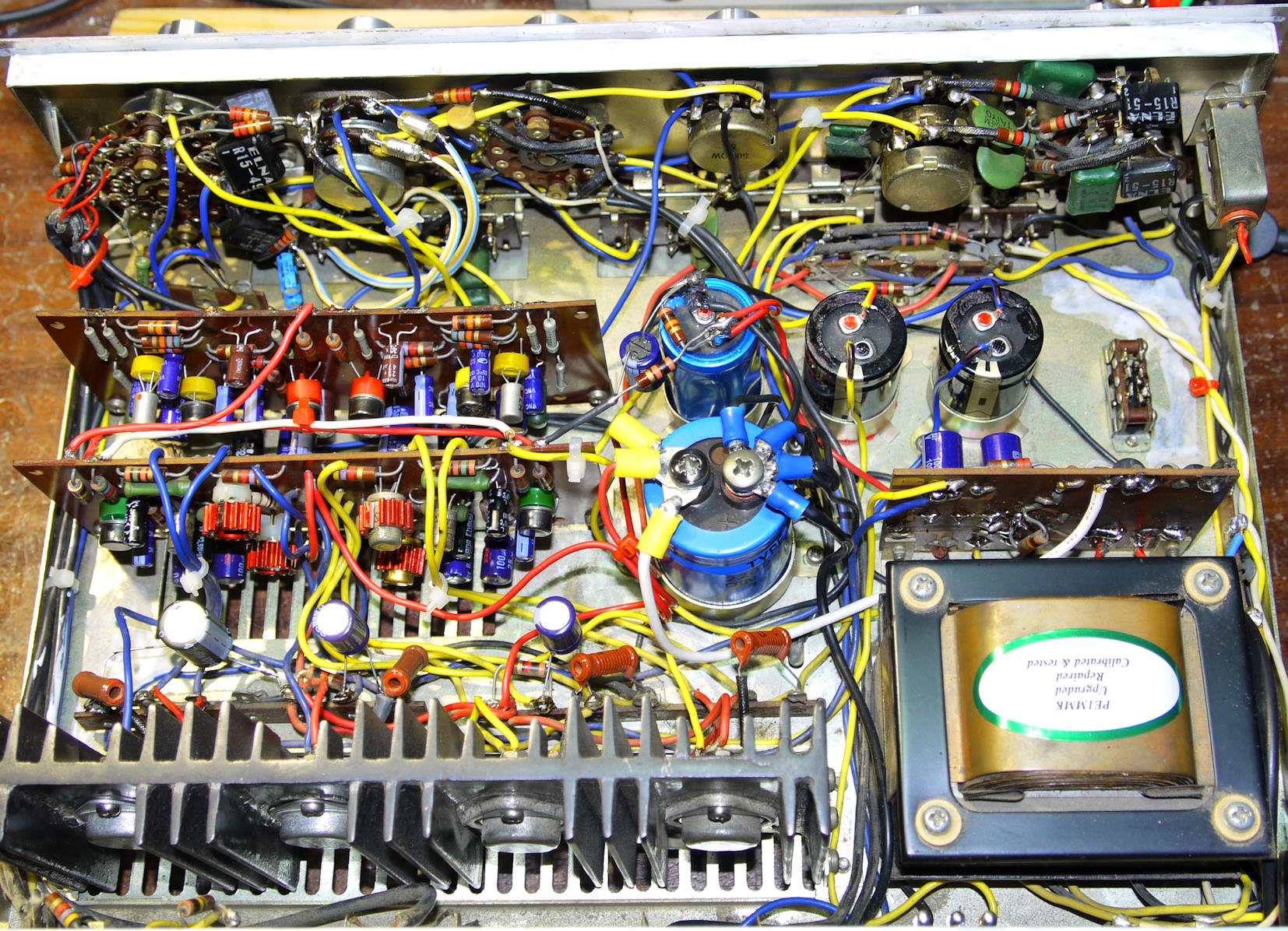 The restored back panel. ^ 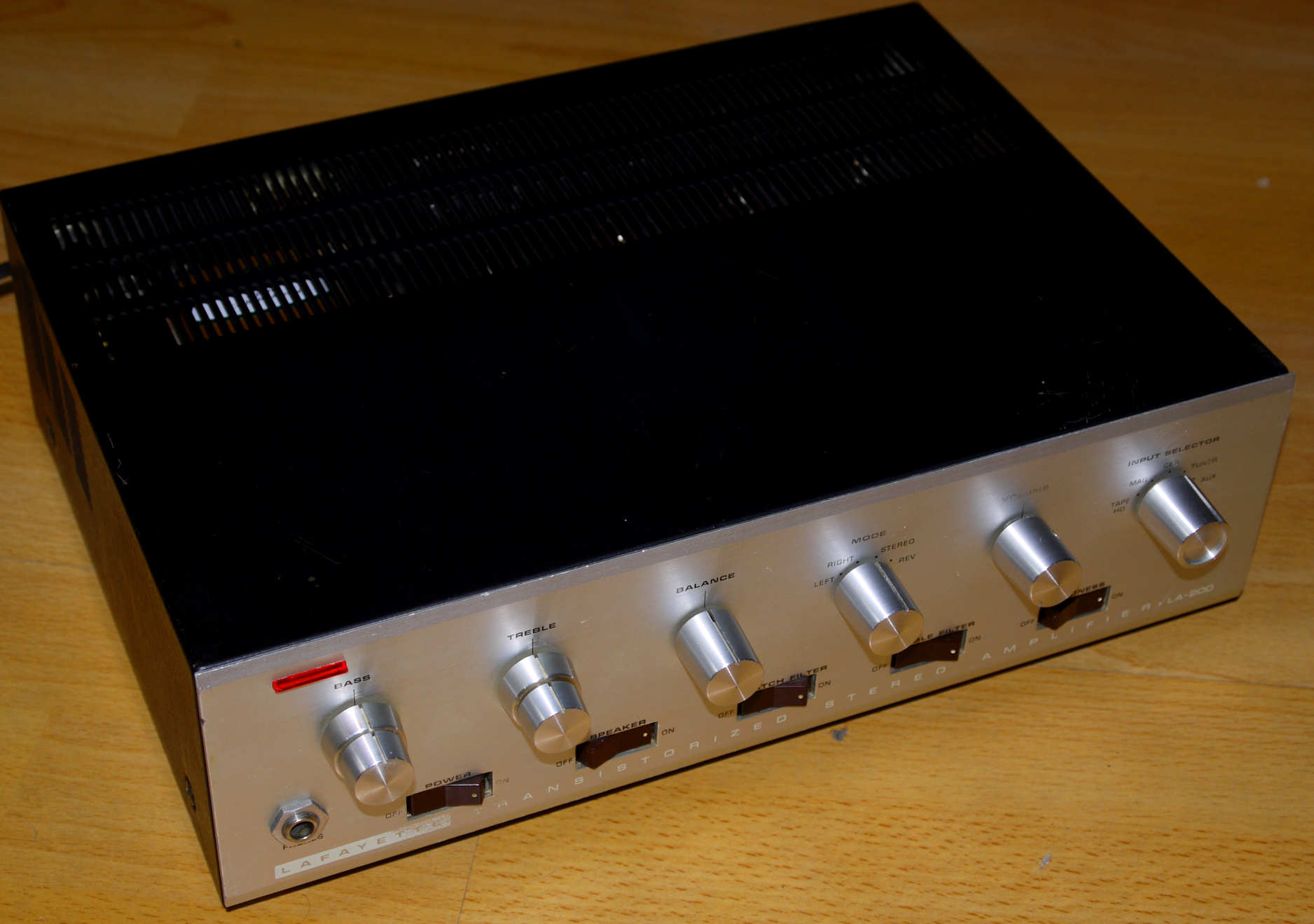 Great product made in Japan, this amp will play fine again for many years to come ^

The sound is very good: powerful and distortionless, considering it is an early 1960's 2x 10 Watts RMS transistor integrated amplifier.


Presented to you by ON9MMK on: