Tannoy offers 3 versions of its supertweeter, intended to accompany their famous
Dual Concentric loudspeakers and may also their vintage models
like the Monitor Gold and HPD.

The ST100 is constructed from solid black ash finished hardwood. The unique Tannoy Performance Platform™, gives stable support and accurate variable adjustment. Not only are they designed to visually blend in with all types of speakers, but they also provide an instant acoustic upgrade that is unavailable in any other way.

Recommended amplifier power: Up to 250 Watts

After reading the whitepaper of Tannoy about supertweeters I got interested in testing a couple of these Tannoy ST-series tweeters.
To be able to test these Tannoy products, I had need for a set of tweeters as a kind of reference to compare these Tannoy supertweeters with, my experience with supertweeters started in the early 1970's.
The below home made tweeters I have constructed in 2000 after experimenting many years with supertweeters using Peerless and many other brands drivers, being not the first supertweeter set I have constructed.
A friend of mine has brought me his Tannoy ST100's for a few months test and I have reviewed them and compared them with my home made tweeters in combination with mainly 3 speaker sets: The Tannoy Sixes 611, the Tannoy Cheviots with 12'HPD's, and the Tannoy Monitor Gold 15' in 200L cabinets. I have used some other speakers, like Marantz, being not so important speakers for this review.

Construction of the ST100:

The ST100 is well constructed and looks very nice on top of a speaker, it fits in almost all room interior designs and the ST100 has certainly some gadget value. The connectors and the settings screws are well constructed and will not easy deteriorate when used intensively. The construction is solid and heavy, the used wood will not weaken when touched often, the used paint is of good quality and will not easy wear off.

The frequency response of the ST100 supplied by Tannoy is quite what I have found measuring the response at home.
The energy selection works fine and the response curve selection of the x-over does quite nicely what is expected.

Setting up a stereo with a set of Tannoy 611's and using the ST100 on top of these, is a first practical use of the ST100 to review the sound. The 611 is a Tannoy 8 inch DC speaker with an additional active Bass unit of also 8 inch. Here you can see what a 611 is all about: http://www.hilberink.nl/codehans/tannoy128.htm you will notice it has much similarity with other Tannoy models of this type of design and size, so for these models this test will be of value as well.
The sound coming from the 611's in combination with the ST100's is much better and the ST100's add a real top to the 611's, that the 611's lack without. High tones coming from all kinds of instruments are brighter and clearer and better noticed, without becoming annoying. I found the 22 KHz + 91 dB setting the best in this setup. The ST100 is one of the best supertweeters I ever heard. The home brew tweeters do quite the same but without the extremes the ST100 is capable of.
The ST100 is a valuable addition to the 611, the home brew is too, although the ST100 leaves it a little behind.

Now with the Cheviot HPD12' it is all a different story. If the placing on the Cheviots of the ST100's is incorrect the added effect of them is very easy getting annoying, specially in high level settings of the ST100. When placed correctly on the Cheviots the sound is acceptable but the ST100 is not capable of adding anything that is worth the use of them. The ST100 simply does not add anything useful and when set to a higher level the ST100 soon adds a fatigueing effect to the total sound image when listening extended time to the Cheviots set up with the ST100, that effect is not present without the ST100's. The same goes for the home brew tweeters. This goes for the original HPD cross-over configuration with the switches set to "level".
However when I use the HPD cross-overs in the configuration I prefer, as discribed on this website, the ST100 is no addition at all, in fact its a downgrade, too much high frequencies in the sound image is the result adding the ST100's.

When listening to the Tannoy Monitor Gold's in combination with the ST100 it was immediately clear that the ST100 is not a product usable with the Tannoy vintage monitors. The added effect is annoying and simply degrading the fine sound image of the Monitor Gold's, an effect that even increased when leveling up the ST100's. Correct placing of the ST100's on top of the MG15's appeared to be of vital importance, incorrect placing was a disaster to the sound image. Not recommended for the MG15, thats my simple conclusion. The same goes for my home brew tweeters.

Home brew or not?

If it is worth considering building your own supertweeters is for you to decide, as the Tannoy ST100 added only very little more to the total sound image, compared to my home brew tweeters. I liked the construction of the supertweeter sets very much, its very informative.
The home build tweeters are in use with my Tannoy Sixes 611 speaker set, the supertweeters are a real addition to the sound image of the 611's.

Schematic diagram of the ST-200 by Felix De Schwartz: 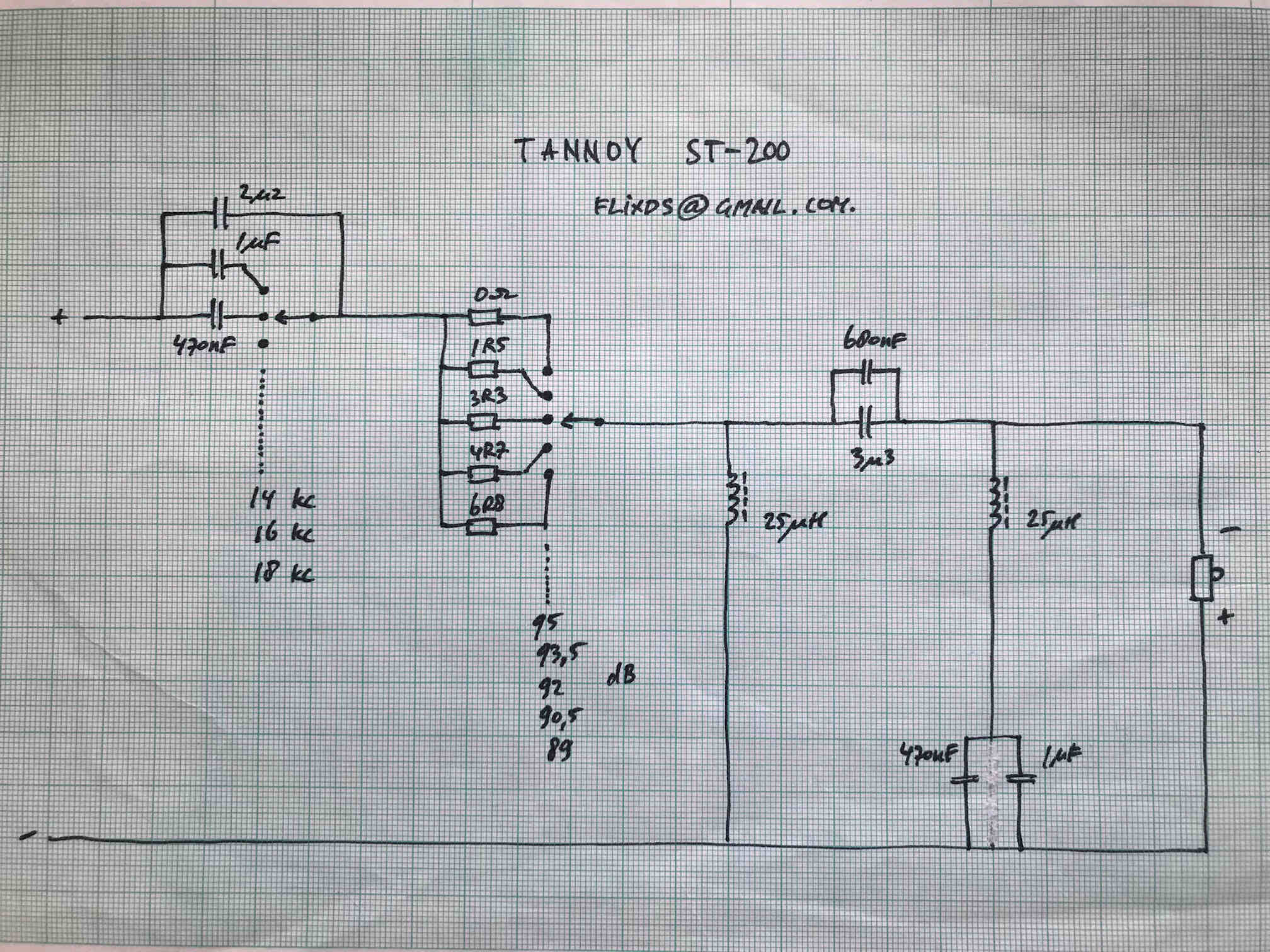 To complete the information on this page:

One of the home made tweeters I have compared the Tannoy ST 100 with.