The new cabinets of Dan Cramer

Dan has send me the below pictures and information. Be patient as this page takes some time to load.

He has made these remarkable and very beautifully constructed cabinets: 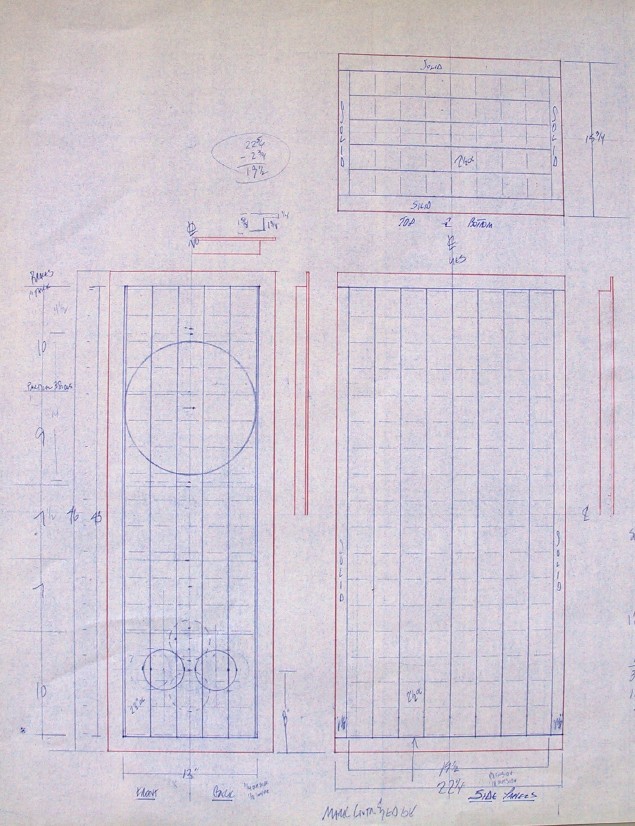 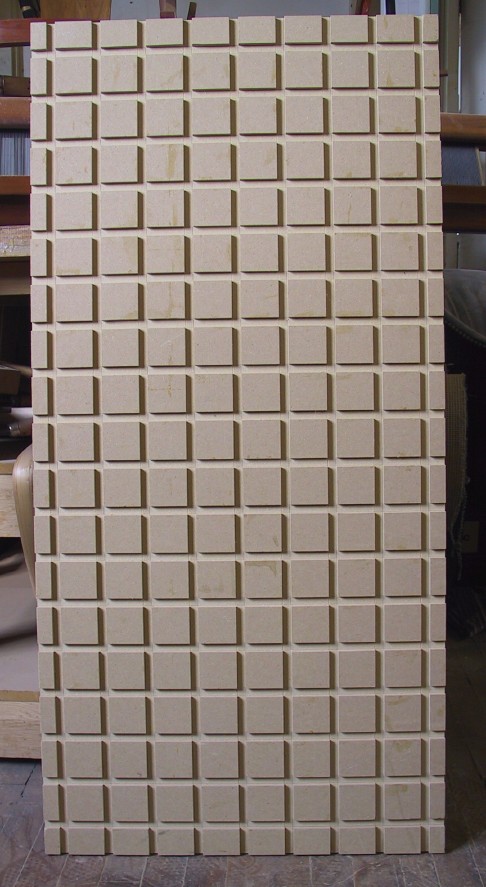 A torsion box is a light weight
very ridged construction, I read about in a woodworking magazine. It
consists of a grid, in this case, 12mm uniform thickness plywood ripped
to strips 30mm wide and placed on edge in a fixture (photo), with
a skin of sheet material, 3mm ply, glued and nailed to each side of the
grid. In setting up the fixture, continuous pieces are in the long
dimension short spacers in the short dimension. The grid is 65mm on
center, I now think 100mm would have been plenty. I applied glue
liberally with a paint roller and nailed the skin to the grid, note I
had penciled the grid on the plywood sheet as guidelines for nailing
(photo). I immediately removed the part from the fixture and applied
the skin to the opposite side, then placed that panel on a flat table
and allowed all to dry overnight. Two cabinets x 6 sides each = a stack
of 12 panels. For the front baffles I had to include blocking for the
driver and port cutouts, I did this after I removed the panel from the
fixture but before I applied the second skin.

If you look closely at the photos you will notice that the outside skin
of the sides over lap the grid, I did this to facilitate assembly and
for cosmetics. Thus, four sides, on each cabinet, have an inside face,
for the top and bottom I choose an inside face. on the inside face and
into each chamber of the grid I drilled two holes (photo). I filled
each chamber with polyurethane foam, it is available here in an aerosol
can and is used for insulation around windows. I cleaned off the excess
and allowed the foam to set for a few days. The foam is ridged and very
adhesive, so the result is very ridged unified panel. 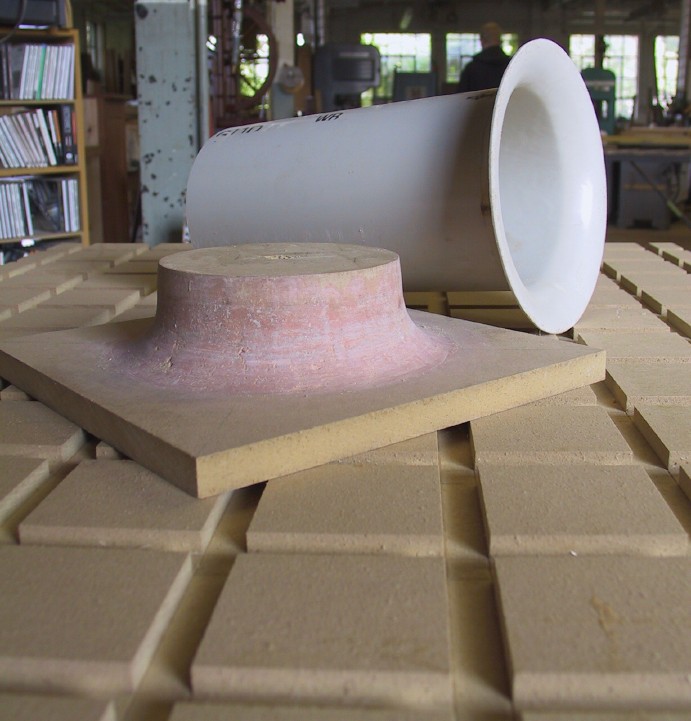 To make the plug i glued 3 layers of 18mm mdf, then scribed a 100mm circle on the face and band sawed and sanded to get ~98 mm diameter. i used a table mounted sanding wheel to maintain perpendicular walls on the plug, and by sanding away the 100mm line i lost ~2mm. before i glued the plug to the base i centered and scribed 100mm and 150mm concentric circles, i glued the plug centered in the 100mm circle. to make the fillet, i shaped a trowel from a piece of plastic, 50mm x 50mm x 2mm, one corner was cut and sanded to a 25mm radius. i mixed bondo and applied it to the mold and formed the fillet with the trowel. bondo hardens in ~five minutes, i found that several, 5 or 6, applications was much easier than trying to do the entire job at once. the trick is to minimize sanding, hard to do on a curved surface. a little care with the bondo will leave only minor surface sanding. my fillet ended at the 150mm circle scribed on the base, that is also the line to which i molded the ports.

My ports need to be 200mm long so i cut pieces 250mm, i lost 3 or 4 pieces learning technique. from one end of the tube i measured 28mm and scribed a line around the circumference of the tube. i used a heat, gun at its hottest setting, and slowly rotated the tube to heat only the 28mm at the end of the tube. it will take some experimenting to learn how much to heat the pvc to soften it enough to stretch over the fillet. i counted 10 to 12 complete rotations of the tube, each rotation taking about 15 seconds. then place the hot end over the plug and push down until the pvc striates to the 150mm circle. if it won't stretch that far you haven't heated it enough, if
the tube wrinkles at the top of the plug you have heated more than 28mm and have not gotten it hot enough at the end. you can reheat the same tube and try again. if it goes to the circle, then center it on the circle as this will help square the port cylinder to the port mouth. maintain pressure and let it cool on the mold about 1 minute then remove. to check for square stand the port on its mouth and make sure the cylinder wall is perpendicular to the table, if not simply reheat and try again. once that was finished i cut the ports to length.

From start to finish: the mold took ~3 hours and ~1 hour to figure out the forming process. now i can make 4 ports in about 20 minutes. 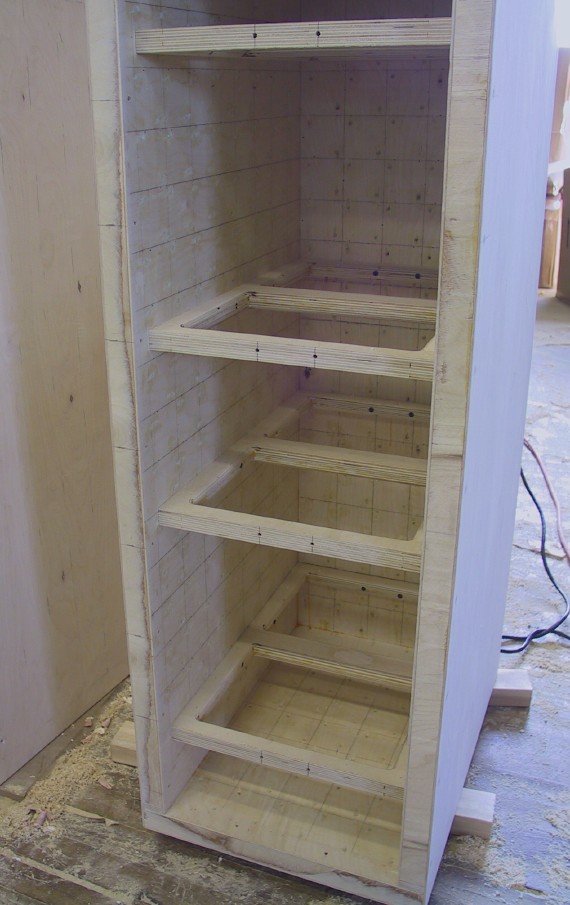 
I cleaned up the edges of each panel and glued and screwed five
sides panels together, the baffle was not glued but placed in position
to act as a spacer. Be careful not to glue it in place accidentally.
The next day I removed the baffle and cut the holes for the driver and
ports, and installed the interior braces. The baffle is screwed to the
braces from the inside through the driver cutout (photo). I have left
the baffle unglued for now. I am still tweaking and I like having the
option to remove the entire front of the cabinet. 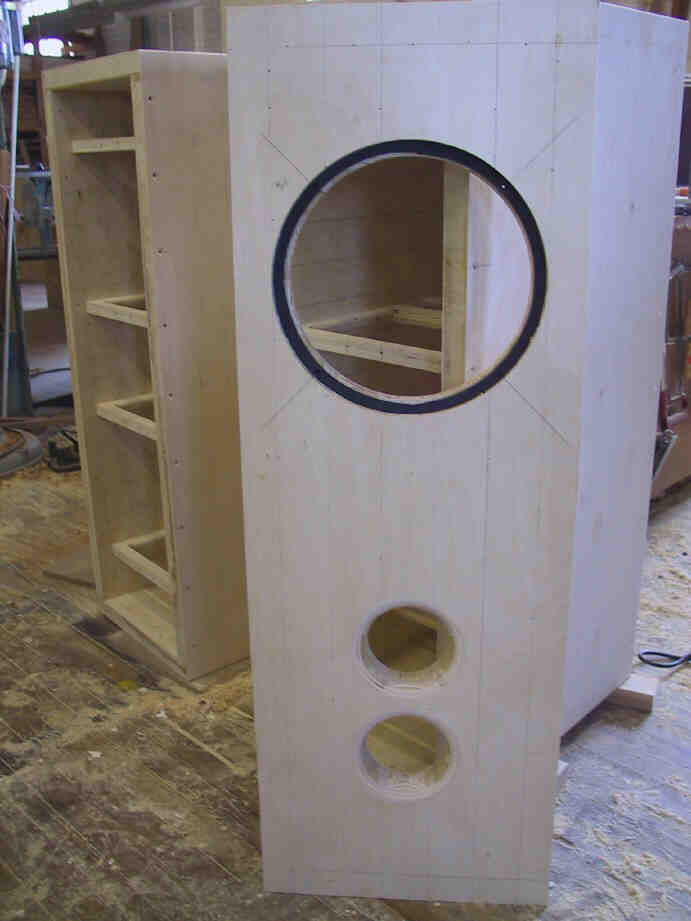 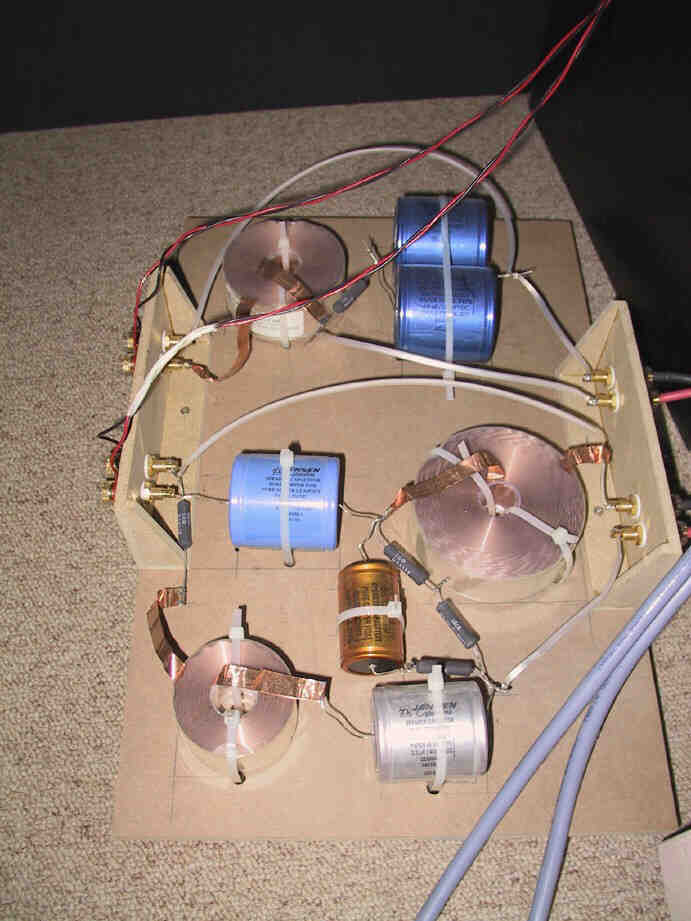 The new cross over filter 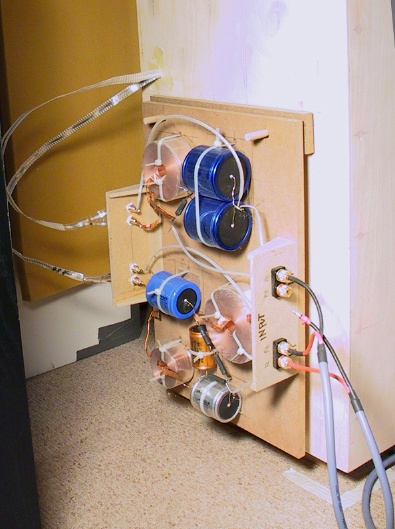 The crossover on the back 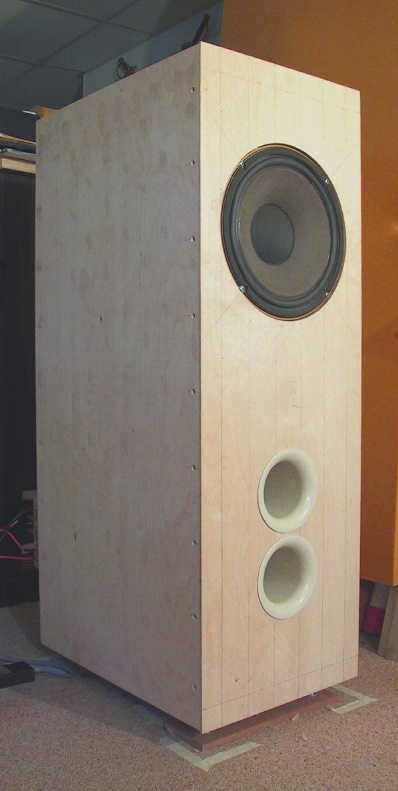 The cabinet from a different angle


The total weight of each cabinet with the driver is approx. 35kg. I am looking
for lighter performed grid to greatly simplify the construction and I
have received several samples which look promising. I actually won't do
any finishing until I complete tweaking.